STUDENTS OUTSIDE BUREAU OF CHANGE IN NEW ORLEANS, LA

BUREAU of CHANGE is my alternative higher education project that activates collaborative digital media as a form of social practice. Founded in 2012 and co-created with students, BUREAU evolved into an higher education atelier akin to a miniature university where an interdisciplinary group—college students, recent grads, scholars and community experts—interacted to create socially and politically engaged work. Under my mentorship as lead faculty, projects emphasized digital media theory and technique, development of civic voice, and real-world experience through the professional presentation of public installations, museum exhibitions or publications.

In 2005, I began an archive-based work that focuses on the complex relationships between detainees at Guantánamo Bay, their lawyers, the international media, and the public. In its most expansive form, my project is the largest privately-archived media collection portraying Guantánamo detainees through a lens of their legal advocacy. In the creation, curation, and distribution of this work in publications, exhibitions, screenings and site specific installations, I propose an experimental, artist-driven approach to the digital archive as a platform for social, educational and historical practice.

Social Services V.1 Bystanders is an interactive public art installation that reframes internet-sourced imagery of current affairs and reflects an interplay between what we are shown and what we see. It sets up an experiment around how we portray and share ourselves in social networks relative to our own image, our immediate surroundings and projected online images of others in moments of pain. 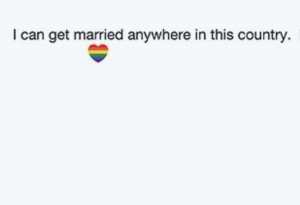 Created for the Internet Yami Ichi, Retweethearts is a series of two-page messages printed on fine writing paper, each with a text sourced from Twitter and a patterned page based on the tweet’s emojis. I invited Yami Ichi visitors to select a Retweetheart of their choice and commission me to hand-deliver it within a two-block range of the market or mail it to a recipient in a security envelope.

{theaterofwar} Syria TV Remixes McCain Town Hall is a study in political messaging, subtle means of propagandistic manipulation and censorship. I compare footage of a Syrian-American woman advocating to Senator John McCain for non-violent diplomacy in Syria with a lightly edited version of her speech broadcast by the Syrian TV station Alikhbaria (الاخبارية السورية). How aligned with the Assad regime’s message must the news be to pass censors in Syria? And how aligned with Youtube censors must a major Syrian news company be to avoid having its account deleted?

“POM (ALSO GOES BY GEORGE)” FROM OTHER GEORGE’S

In the summer of 2007, I traveled across Texas on commission by the University of Texas in search of a establishments that share the name George. The project was conceived as a way to honor a large donor and prominent alumnus of the Law School, also named George, in lui of a monumental statue in his image. Other George’s is a permanent photography installation at University of Texas-Austin and a limited edition artist book that includes notes from my interactions with the people I met and photographed at other George’s. 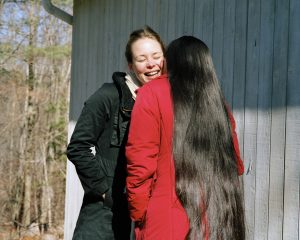 “SARAH AND NEHA” FROM THE SILENCE BETWEEN

The Silence Between is a series of portraits of women in their 20s and 30s who define themselves as best friends and were drawn to participate in my record making. The project contemplates the role and responsibility of the photographer to those she photographs as intermediary, interloper and documentarian in a relational situation in which secrets are shared, verbally and visually, and distilled to a single image.

“UNTITLED (SHOWER)” FROM I DIDN’T NOTICE I WASN’T ALONE

I Didn’t Notice I Wasn’t Alone is a photo-based installation and one-of-kind artist book. Post-9/11 in a nation preoccupied with asserting indomitable force to man-made fear of constant threat; masculinity was in flux. I was looking at paintings by Richard Diebenkorn modeled by the psychologist Phyllis Diebenkorn, his wife, in the 1950s and 60s. Femininity was in flux; a female figure constrained though sometimes dodging dependence on masculine control and quietly asserting sovereignty. I turned to the male figure in a domestic space, positioning him in relation to her, and assuming rather than polarizing dynamic femininity.