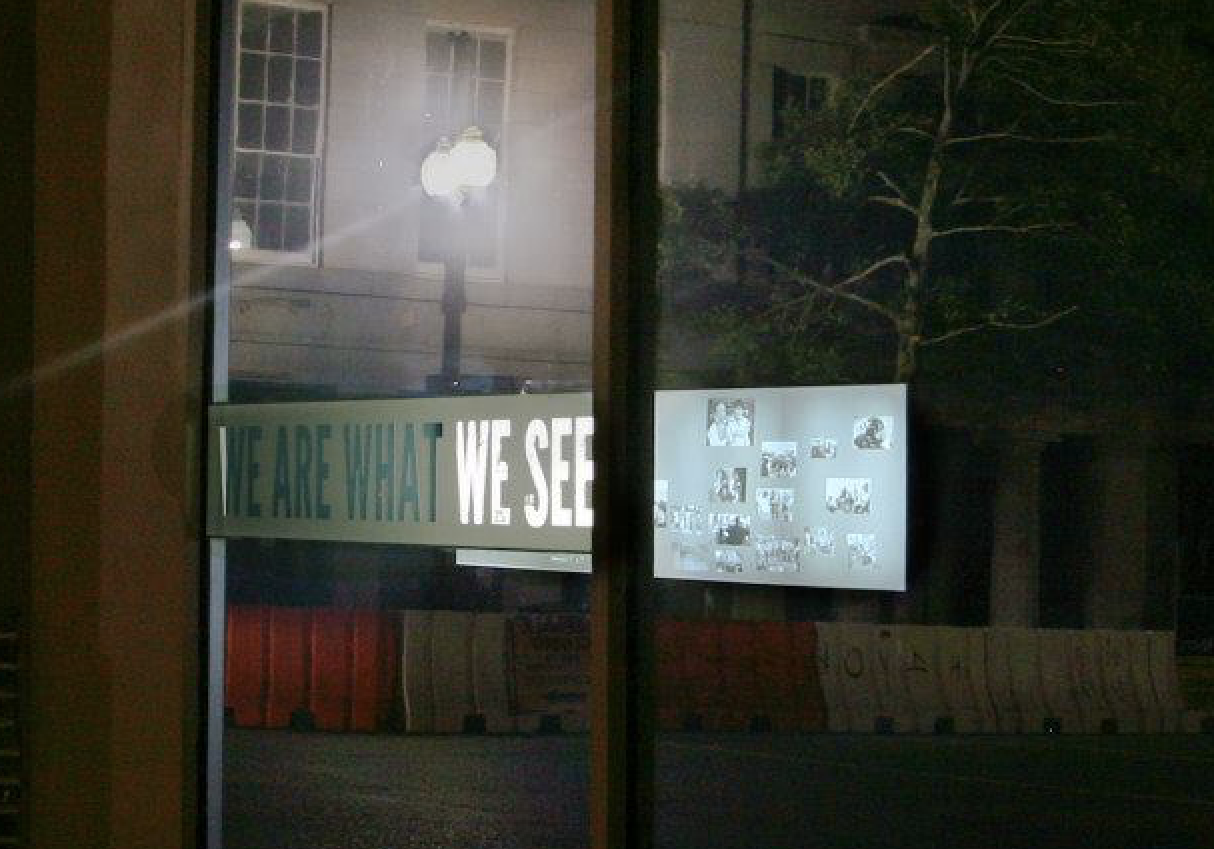 Traditional notions of the public forum are no longer

Pictures on social media get more engagement than text or links

Sight, sound and motion are of utmost importance to market capitalization

Does this intersection look the same as it did yesterday?

If they walk down the street with a megaphone would we look?

Social Services generates its own records. Onlookers reflexively respond to selfie-ready mirrored windows, rather than any specific instruction, and photograph acts of observing to post to social media. It sets up an experiment around how we portray and share ourselves in social networks relative to our own image, our immediate surroundings and projected online images of others in moments of pain.

More on this project and the instagram posts by passersby who interacted with the installation on the BUREAU of CHANGE website.

Web sources behind the glass | WE ARE WHAT WE SEE

A Palestinian man reacts as he carries the body of his daughter, bystanders watch  58K shares

The photo was actually taken in 2011, and the “Israeli” soldier was actually a Palestinian militant once caught in a staged Pallywood scene (note all the onlookers eager to see how real cinematography works) 195 shares

An all too familiar (murder) scene in Philadelphia   5 comments

A woman carries her child to escape from the burnt tents at Zattari Syrian refugee camp near Mafraq, Syria   1 comment

Onlookers in Rhinebeck, N.Y. try to catch a glimpse of wedding guests  no data

The noose is removed from around the neck of Balal; Iranian killer’s execution halted at last minute by victim’s parents   41,360 shares

Stunned onlookers watch as Lacertosa collapses in the street, having been stabbed with a butcher’s knife   0 comments

Young relatives of the four boys from the Bakr family, killed during Israeli shelling, cry during their funeral in Gaza City   no data

Daniel Endera, left, 25, is seen getting beaten by three men on a New York subway train in November, a fight that was videotaped by onlookers and uploaded to World Star Hip Hop   22 comments  826 shares

Indian onlookers use their mobiles to click photographs of the body of a farmer, Basappa, killed by a man-eating tiger   4 shares

Anger: Onlookers became outraged at the auction of a Chinese boy and began to attack his father, who was caught in a head lock by another man   127 comments

As news of the riots spread, families of the prisoners clamored outside the prison gates, rattling the chainlink fence and shouting at police for word about the victims  7 shares   5 comments

There are a lot of people that have visited Israel; only a very small number of people have been in Gaza as well   44 comments  351 shares